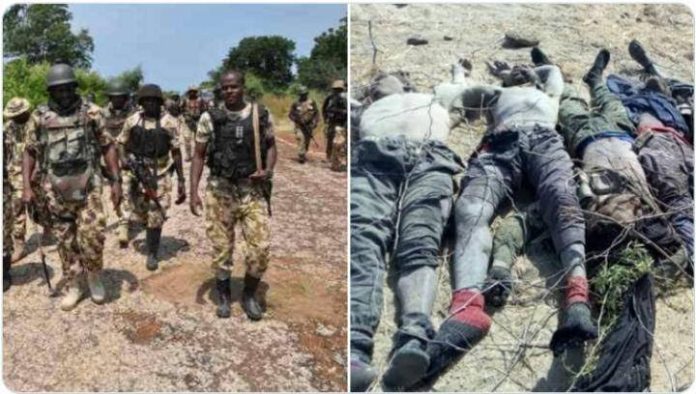 The National Rebirth and Conscience Platform (NRCP) has called for concerted efforts by all relevant stakeholders to compliment the security agencies in their quest to rid the nation of criminal elements.

In a statement signed by Publicity Secretary, Comrade Aaron Otache, on Thursday, NRCP saluted the bravery and commitment of the security personnel to end terrorism, banditry and other criminal acts in the country.

While particularly acknowledging the exploits of the Nigerian Army in engaging the Boko Haram terrorists in the North-East and other parts of Nigeria, the group believes more can still be achieved with the support of Nigerians.

From political, religious and traditional leaders, civil society organizations, the media, NGOs, and other critical stakeholders, NRCP said that all hands must be on deck.

It, however, assured the security agencies of its optimum support as they continue to push away Boko Haram, bandits and others out of the country.

The group charged all stakeholders to do so in the overall interest of the country in resolving this crisis.

National Rebirth and Conscience Platform call for concerted efforts by all stakeholders to end the menace posed by acts of terrorism, banditry and other criminal acts in the country.

We wish to state that the invaluable efforts of our various security agencies in the country have been outstanding given the enormity of the task at hand. We salute their bravery and commitment to addressing these security concerns.

It must be stated that ending acts of terrorism and banditry does not rest on the shoulders of the security agencies alone, but rather every stakeholder in Nigeria has a role to play in ensuring that Nigeria defeats terrorism, banditry and other acts of criminalities in the country.

The National Rebirth and Conscience Platform recognize the efforts of the Nigerian Army in engaging the Boko Haram terrorist group in North-East Nigeria and other parts of Nigeria where they are involved in internal security operations aimed at addressing acts of banditry and other militant activities.

There is a need for more to be still done, and we have confidence that recent results posted by the Nigerian Army and other security agencies are testimonies that we are closer to the end of the issue.

The National Rebirth and Conscience Platform, therefore, call on our political leaders, civil society organizations, religious leaders, traditional leaders, the media, the NGOs, and other critical stakeholders to lend their support to the Nigerian Military in addressing the various threats posed by criminals elements, their sponsors and collaborators.

These stakeholders must realize that they all have invaluable roles to play in complementing the efforts of the security agencies as these criminal elements and perpetrators of evil in Nigeria are not sprits but human beings with names and addresses.

Our various security agencies have been proactive, and it consequently behoves all on all well-meaning Nigerians to rise to the occasion by lending their support in ways too numerous to mention in our quest to rid Nigeria of terrorism and other acts of criminality that has threatened the fibre of our existence as a people and as a country.

The National Rebirth and Conscience Platform wishes to state that in the light of the foregoing, what is needed to end insecurity in Nigeria is a concerted effort by all stakeholders and not just the security agencies alone if we are desirous of winning the war against criminality in Nigeria.

The National Rebirth and Conscience Platform commend the various efforts of our security agencies and encourage them not to relent in their pursuit of a Nigerian where acts of terrorism, banditry, kidnappings and other criminal activities are reduced to the barest minimum.

The National Rebirth and Conscience Platform pledge its support to the efforts of our security agencies in reducing acts of terrorism, banditry and other criminal acts and encourages other stakeholders to do so in the overall interest of the country in resolving this crisis.