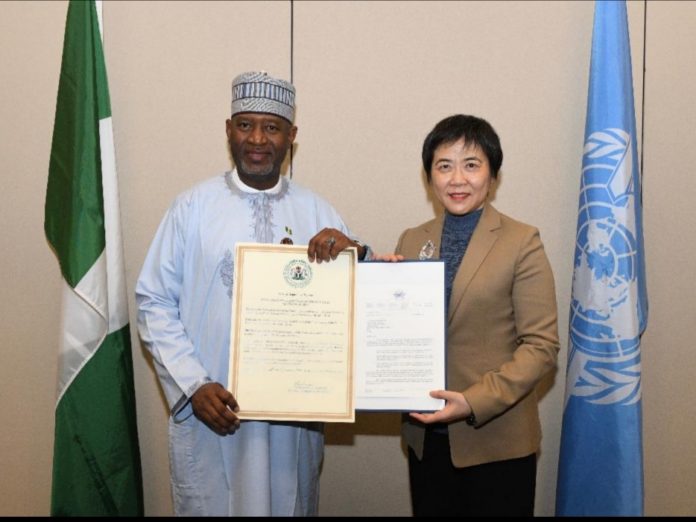 Minister of Aviation, Sen. Hadi Sirika has on Wednesday on behalf of the Federal Republic of Nigeria, deposited the ratification on ‘Protocol to Amend the Convention on Offences and Certain Other Acts Committed on Board Aircraft with the International Civil Aviation Organisation, ICAO at the United Nation agency’s headquarters in Montreal, Canada.

This feat is in line with Nigeria’s efforts to support air laws against unruly behavior on board aircraft. Recall that that was agreed at Montreal on 4 April 2014’ also known as “The Montreal Protocol 2014.”

While depositing the Montreal Protocol 2014 Sen. Sirika said: “This is historic for Nigeria having been the Twenty-second state to deposit the ratification and give strength to the implementation which will come into effect from 1 January 2020. It is President Muhammadu Buhari’s desire that this law come into effect because it will mitigate against unlawful interference on board aircraft.”

“Nigeria will continue to support any law that will make air transport even safer. And this is one of them.”

Dr. Fang Liu, the Secretary General of ICAO while accepting the document attested to the fact that ICAO needs 22 countries to ratify this protocol for it to become effected and Nigeria is the 22nd state to have completed the process hence, it will come into effect from 2 January 2020

“I am delighted to announce that with this deposit, the Montreal Protocol 2014 will enter into force on 1 January 2020. I wish to commend Nigeria for being the twenty-second state to have completed the ratification process of this instrument,” Dr. Liu said.

“The Montreal Protocol 2014 amends the convention on Offences and Certain Other Acts Committed on Board Aircraft, done at Tokyo on 14 September 1963 (Tokyo Convention, 1963). The Protocol addresses the issue of rising incidents of unruly and disruptive behavior on board aircraft by significantly improving the ability of states to expand jurisdiction over relevant offences and acts to the operator. The Protocol will also serve to enhance global aviation security provisions by expressly extending legal recognition and protections to n-flight security officers.”

According to a statement by the Director Public Affairs, Ministry of Aviation, James Odaudu, apart from the Montreal Protocol 2014, Nigeria deposited ratification of the “Protocol Relating to an Amendment to the Convention on International Civil Aviation [Article 50(a)], signed at Montreal on 6 October 2016”, which is the proposal to increase Council member states from the current Thirty-Six (36) to Forty (40).

Also deposited was the “Protocol Relating to an Amendment to the Convention on International Civil Aviation [Article 56], signed at Montreal on 6 October 2016”, which is the increase of Air Navigation Commission (ANC) membership from 19 to 21.