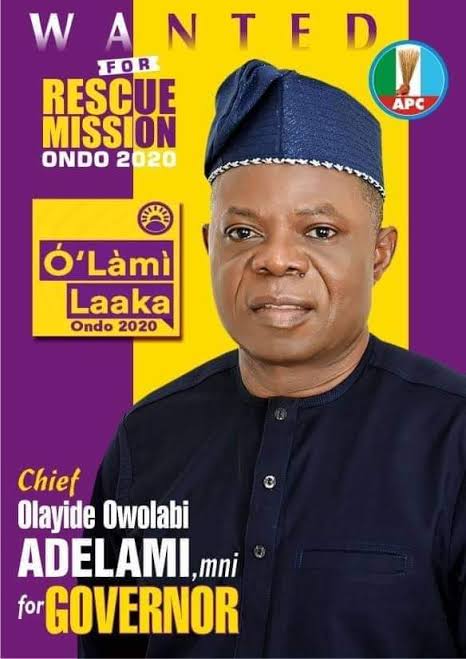 Ahead of Ondo governorship primary election, the Adelami campaign organisation has raised an alarm over plot to forcefully use the local government chairmen of the party to discredit the membership of its principal Chief Olaide Owolabi Adelami.

The campaign team in a statement signed Wednesday in Abuja, by Barrister Segun Ogodo, urged the national leadership of the APC and the presidency to disregard what is described as ‘campaign of calumny’ against their principal.

“For record purposes, Chief Olayide Adelami is a registered member of the APC in Igboroko 2 ward 3 where he worked assiduously for the success of all APC candidates in the 2019 general election.

“We hereby call on the leadership of APC, the presidency and all members of our great party to disregard this malicious and fallacious harassment coming from a governor who openly campaigned and worked against APC and the reelection bid of President Muhammadu Buhari.”

The campaign team expressed pity for party LG chairmen “for the predicament they have found themselves,” alleging that some persons were planning to “induce threats to life in forcing the chairmen to falsely claim that Chief Adelami is not a member of the party.

“Whereas, Chief Adelami had been at the forefront of promoting party cohesion in Ondo state, a job he started in 2018 when he was appointed state coordinator of the Presidential Support Committee.”

The statement said if there is anyone to be dissociated by the party chairmen, it should be Chief Adelami, who has contributed much to the growth of APC in Ondo state in particular and in Nigeria in general.

“We reiterate for the umpteenth time that Chief Olayide Adelami is a registered member of the APC, having worked closely with him the governor during his election in 2016 and during presidential election in 2019 and having seen his membership card on several occasions.

“We implore the Inspector General of police to act on all petitions we have written to his office in preventing Akeredolu from setting Ondo state on fire with his violent acts.The good people of Ondo State are watching the reluctance of security agents towards Akeredolu’s killers squad with their utmost attention.”

The statement urged the national body of APC to ask governor Akeredolu for explanation on why APC lost Ondo state in 2019 presidential election.