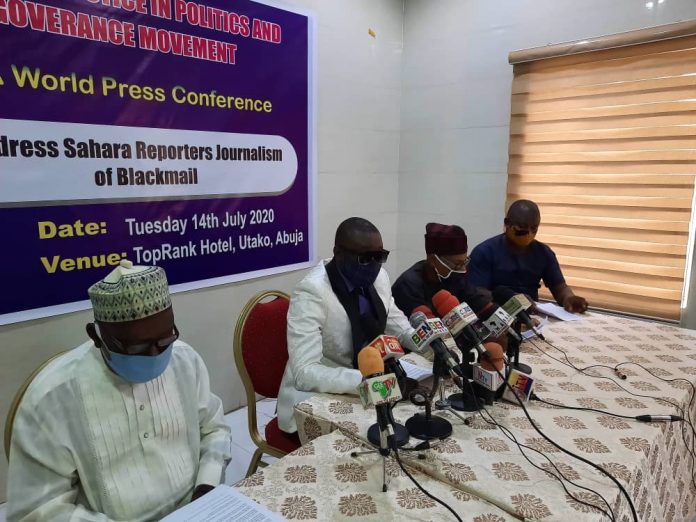 An online publication, Sahara Reporters has been accused of working underground to frustrate the anti-corruption war of President Mohammadu Buhari’s administration.

Equity And Justice In Politics And Governance Movement, at a press conference in Abuja, accused the online publication of receiving $25m to tarnish the image of the Attorney-General of the Federation and Minister of Justice, Mr. Abubakar Malami, SAN, and the anti-corruption fight.

Dr Musa Moses Attah,
National Coordinator of the movement said for the benefit of those who do not know the modus operandi of Sahara Reporters, their stock in trade is to peddle FAKE News and millions of Nigerians already know this.

Dr. Attah said the attack on the person of the AGF is not the first on government officials by Sahara Reporters and therefore should not be taken seriously.

”The AGF is a fine gentleman who has performed his duty creditably well since his appointment into that office in 2015 and because of his sterling qualities and performances, President Buhari found him worthy of re-appointment.

”It may interest Nigerians to note that this is not the first time Sahara Reporters will be publishing FAKE News against government official”.

He said the medium once reported the death of Ghali Umar Na’abba, former House of Representatives Speaker and later retracted the report and apologized to the former speaker.

”With all that we have stated above, it is our view that the FAKE News published by Sahara Reporters against the AGF should not be taken seriously by Nigerians as the leading publisher of FAKE news against government officials is out to tarnish the image of the well respected AGF.

”For instance the sponsored photos of houses supposedly “owned” by Malami in Kano and other places have turned to be a hoax and misbegotten as the minister has disconnected himself from allegation of purchasing a property for his son in Abuja. It might interest you to note that a photograph of a center in Kano built over 30 years ago was allegedly attributed to Malami. Another property on Ahmadu Bello Way/Gidado Road Kano ascribed to Malami is owned by a serving Military officer under investigation. The lies are many.

”As a private legal practitioner, it is a known fact that Malami has been into businesses and even owned Rayhaan Hotels long before serving as a Minister. Is it expected that the business will crumble simply because he was chosen to be a Minister?

”We at the movement are worried that the rate at which Sahara Reporters is going, journalism may be dragged into the mud. We therefore, call on Online Publishers Association of Nigeria (OPAN), Guild of Corporate Online Publishers, (GOCOP), Nigerian Union of Journalists (NUJ), Nigerian Guild of Editors (NGE), Nigerian Press Council (NPC), and the Broadcasting Organisation of Nigeria (BON) should call Sahara Reporters to order before the noble profession of journalism is destroyed.

”Before bringing this press conference to a close, we want to put it on record that we have it on good authority that Sahara Reporters collected $25m (25million dollars) to tarnish the image of government officials and to ridicule the government of President Mohammadu Buhari, who is doing his very best to ensure that Nigeria is rid of corruption” he said.