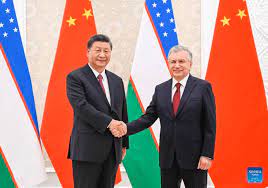 Chinese President Xi Jinping paid a state visit to Uzbekistan upon invitation and will attend the 22nd Meeting of the Council of Heads of State of the Shanghai Cooperation Organization (SCO) to be held in Samarkand.

President Xi will hold talks with his Uzbek counterpart ShavkatMirziyoyev, and exchange views with other state leaders attending the SCO meeting on comprehensive cooperation within the SCO framework, as well as major international and regional hotspot issues.

Together, they will chart a new blueprint for China-Uzbekistan relations and promote better development of the SCO.

The Chinese and Uzbek peoples enjoy a long history of friendship. More than 2,000 years ago, the ancient Silk Road has established a close bond between the two peoples and facilitated mutual learning, which mirrored the Silk Road spirit of peace and cooperation, openness and inclusiveness, mutual learning and mutual benefit.

Since 30 years ago when China and Uzbekistan established diplomatic ties, the two sides have always treated each other equally, shown mutual respect and pursued win-win cooperation, constantly deepening political mutual trust and advancing mutually beneficial cooperation. Bilateral relations between the two countries have been brought to new levels.

Under the strategic guidance of and the efforts made by the two heads of state, China and Uzbekistan have achieved fruitful results in their cooperation in various fields.

President Xi paid state visits to Uzbekistan in 2013 and 2016, and President Mirziyoyev visited China three times in 2017, 2018 and 2019, attending the 1st and 2nd Belt and Road Forum on International Cooperation and the SCO Summit in Qingdao.

After the outbreak of COVID-19, the two heads of state have maintained close communication and exchanged views on enhancing multilateral cooperation and coordination on international affairs. They have reached a series of important consensuses. In February this year, President Mirziyoyev attended the opening ceremony of the Beijing Winter Olympics.

China and Uzbekistan share similar development philosophies. Both of the two countries are ancient civilizations along the Silk Road in pursuit of peaceful development and common prosperity.

China and Uzbekistan have sincerity in and a strong desire for cooperation. They see high economic complementarity and enjoy huge potential of cooperation.

Last year, their bilateral trade exceeded $8 billion, and China has maintained Uzbekistan’s largest trading partner and largest destination of exports for years. China’s total investment in Uzbekistan has hit $10 billion and there are currently more than 2,000 Chinese enterprises doing business in Uzbekistan.

The two countries have achieved remarkable progress in the cooperation in poverty reduction, sci-tech innovation, digital economy and green development. Chinese vaccines, which can now be jointly produced with Uzbekistan, have played a major role in Uzbekistan’s fight against COVID-19, and a Chinese COVID drug has been approved for clinical use in Uzbekistan, providing effective protection for the life of people in both countries.

China fully supports Uzbekistan in playing its role as a rotating chair of the SCO, which mirrors the two countries’ sincere and profound friendship.

Uzbekistan is an ancient country along the Silk Road, and Samarkand an important hub linking the East and the West. By holding the SCO summit in Samarkand, Uzbekistan has well associated the Silk Road spirit with the Shanghai Spirit of mutual trust, mutual benefit, equality, consultation, respect for diversity of civilizations and pursuit of common development.

The going is difficult when doing it alone; the going becomes easier when doing it with many others. President Xi’s state visit to Uzbekistan and attendance at the SCO Samarkand Summit are of milestone significance for China-Uzbekista