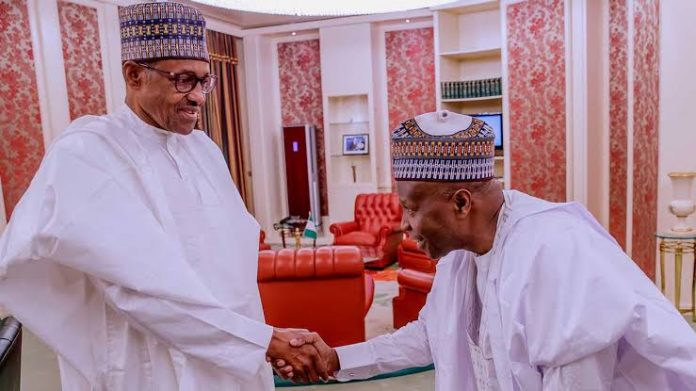 The complete flushing out of Boko Haram terrorists and other violent groups in Gombe State has been achieved through the sustained efforts and commitment of the President Muhammadu Buhari administration to secure Nigera, a prominent progressive politician, Alhaji Ali Goje , has said.

Goje , who hails from Gombe state in a chat with newsmen in Abuja, said Gombe has benefitted immensely from the President Buhari administration in the area of security.

He said this is another great achievement of the Buhari administration that is often overlooked but is of utmost significance to the people of the state and Nigeria.

While recalling what Gombe went through in the past, Goje said it was so bad that  Gombe State was considered as one of the sleeper cells of Boko Haram where they keep reserve fighters who many times unleash violence on the people of the state .

He said in addition to the terrorists who were threatening the peace and security of the state, there was a whole clan of political thugs being raised in the name of Yan Kalare and Sara Suka who were equally tormenting the people of the state.

He said the combination of these violent groups,  enthroned a regime of violence in Gombe and made life unbearable for the common man in the state.

“People were afraid to go about their normal businesses because of the activities of terrorists who had gradually crept into the state and were manifesting in many forms.

“Many parts of the state came under attack from the terrorists,  the height of which he said was the attempt by Boko Haram to overrun Gombe town in 2015.

He said the explosions and sounds of gun shots arising from that incident alone when the Boko Haram seized a checkpoint and tried to enter Gombe before they were repelled, was traumatizing enough.

Goje also recalled that prior to that incident, the Boko Haram had twice in 2014, stormed a French-owned cement company, Lafarge, as they attacked two towns in Gombe state, Bajoga and Ashaka, raided banks and burnt government buildings as well as political party offices

He said though the terrorists were pursued by the military for five kilometres, from Bajoga to Ashaka, after three hours of fighting, the fear that gripped Gombe from that encounter was palpable.

The politician said as if that was not enough, youths in the state were drawn to violence by the patronage of local politicians who engaged them as thugs who go about killing people and burning houses of political opponents.

He said the situation was so bad that people could not move freely as they could be attacked directly or be caught in any cross fire.

Goje says he strongly believes that the coming of President Muhammadu Buhari has helped to restore normalcy, peace and tranquility to the nooks and cranny of Gombe State.

He said that is why Gombe, though in the Northeastern part of the country, has remained  one of the most peaceful states in Nigeria today.

“When President Buhari was sworn in, things began to change. I don’t know whether to call it body language, but immediately he won the 2015 election, we began to see improvements in the security in Gombe.

“When President Buhari finally directed the relocation of the operational headquarters to the Northeast, that was when it dawned on us that finally, the solution to our problems had come and we have not been disappointed since then,” stated.

Goje said from 2015, many of the terrorists were arrested and many of them fled to Chad and parts of Borno as they couldn’t stand the heat of the onslaught against them.

The politician recalled that in 2018, troops of Operation Lafiya Dole and the Department of State Service (DSS) arrested a bomb specialist who makes Improvised Explosive Devices (IED) for  Boko Haram, in Gombe which marked the neutralisation of their activities in the state.

He thanked President Buhari for restoring peace and security in Gombe saying it is something the people of the state cannot forget in a hurry.

“You know they say it is who wears the shoes that knows where it pinches. We have worn the shoes of terrorism and political violence and we are now wearing the shoes of peace and calm so we know the difference, Goje stated.

He said people in Gombe now go about their normal businesses without fear of being attacked or bombs exploding and called on the government to sustain its efforts so that meaningful development would thrive in the state.

Hon. Goje called on the government and people of Borno and other parts of the Northeast to embrace the President’s efforts so that terrorism would be given the final push out of Nigeria.

“Let us join hands and collaborate with the President, those of us from the Northeast should not allow other interests to deny us of the joy and peace and security, Mr. President means well,” he added.