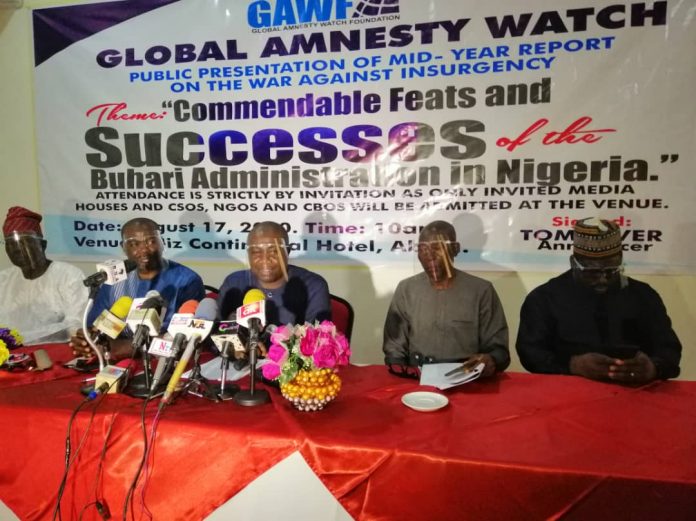 The 36-page report, titled “Commendable Feats and Successes of the Muhammadu Buhari Administration in the War Against Insurgency in Nigeria” examined the country’s fight against insurgency in the last five years.

According to the report, the emergence of President Buhari in 2015 saved the country from impending collapse and disaster.

“Nigeria was indeed on the brink and was in dire need of a saviour that would lead the onslaught against the rampaging Boko Haram insurgents that were gathering momentum every passing day,” it read in part.

“The periods of 2010 to 2015 was indeed gloomy when the Boko Haram insurgents overran a military base in Baga, Kukawa local government area in Borno state, in what remains the deadliest Boko Haram attack in the history of the insurgency in North-East Nigeria.

“The 2015 Baga massacre was a series of mass killings carried out by the Boko Haram insurgents between January 3 and January 7 2015. Baga and at least 16 other towns were destroyed as over 35,000 people were reported to have been displaced, with many feared to have drowned while trying to cross Lake Chad and others trapped on islands in the lake.”

The report, however, noted that “Boko Haram has been significantly downgraded since the coming on board of President Muhammadu Buhari in 2015.

“The insurgents have been pushed back and restricted to the fringes of the Lake Chad Basin Region around the Borno axis, where they no longer control any territory as was the case before.”

While admitting pockets of attacks occasionally experienced in Borno, GAW hailed the president for liberating five states and restoring normalcy.

Among others, the report acknowledged that President Buhari instilled professionalism and innovations in the operations of the Armed Forces of the Federal Republic of Nigeria.

It added that “the Muhammadu Buhari administration also entrenched a regime of transparency and accountability in the Nigerian Military that ultimately saw to the renewed vigour in the prosecution of the war against Boko Haram insurgency as well as other forms of criminalities in the country. The era of massive corruption in the Military has also been curtailed through the multilayer processes introduced in line with global best practices in defence spending.

“This reports also identified that there has been an improved defence budgeting as well as the provision of training for officers and soldiers in counterinsurgency operations.”

GAW, however, recommended that all relevant stakeholders must continue to render support to the efforts of the Federal Government towards addressing the pocket of security issues in the country.

It further called on the “political leadership of the various states in the country to dutifully align themselves with working solutions and not promote divisions along ethnic or religious lines.

” The various security agencies must continue to promote credible Intel on the activities of criminal gangs in the country and sharing same in a process that will not compromise the system.

“The government must begin the process of identifying and prosecuting those found guilty of aiding and abetting the activities of terrorist and militant groups in the country.

“The government of Borno State must come to the table by tasking all stakeholders in the state to proffer solutions that would assist the armed forces  in dislodging the remnants of the Boko Haram insurgents perpetuating violence in Borno State.”