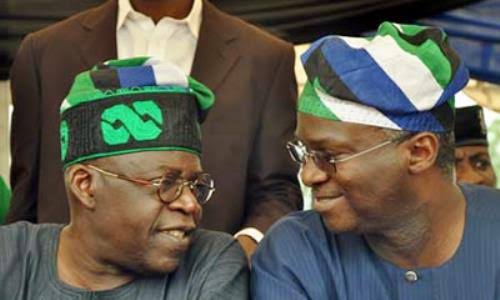 The Economic and Financial Crimes Commission (EFCC) has been asked to probe the administration of Asiwaju Bola Ahmed Tinubu and the Minister of Works, Babtunde Raji Fashola, SAN, as governors of Lagos state.

The petitioner, Coalition Against Corruption and Impunity in the petition to the commission and signed by John Olufemi and Mohammed Sanni, Co-ordinator and Secretary, respectively, asked the anti-graft agency to look into the activities of the two former governors between 1999 to 2015 when they governed the state.

The petition, dated July 24, 2020, was copied to the Attorney General of the Federation, Abubakar Malami and the Inspector General of Police, Mohammed Adamu.

According to the organisation, over the years, the law enforcement agencies appear uninterested and unwilling to probe the many allegations of infractions allegedly committed in Lagos under Bola Ahmed Tinubu and Babatunde Fashola as governors.

The coalition asked the anticorruption agency to undertake a holistic investigation of the two former governors especially in the areas of land administration, tax collections and other areas.

Parts of allegations the coalition is asking the commission to look into are the development of 1,000 hectares of land for golf course and housing estate by Asset and Resource Management Limited at N75billion located at Lakowe near Ibeju Lekki Government given to Lekki Concession Company (LCC) partly owned by Tinubu and Fashola.

Another area is alleged operation of eight foreign bank accounts while in office as Executive Governor of Lagos State in contravention of Section 7 of the Code of Conduct Bureau and Tribunal Act, Cap 56 LFN, 1990.

Other allegations the coalition is asking the commission to probe are the N250 hectare of land valued at N35billion strategically located at Ajah Junction on Lekki Road originally meant for the construction of General Hospital for Eti-Osa Local Government, handed over to Trojan Estate Limited; transferring of the annex of Lagos State Guest House in Asokoro Abuja, purchased by the Lagos State Government in 2006 for N450million to protect the main building from security breach and a 14-hectare Parkview Ikoyi estate foreshore land reclaimed by Lagos State Government.

The commission was also asked to probe the Payment of 70 percent up front to contractor cronies for awarded contract yet to be executed in contravention of section 120 (4) of the 1999 constitution.

The coalition said, ”It is in this light that we write to request that you use your good offices to allow for thorough and detailed investigations into the activities of the Lagos State Government, especially between the period 1999 to 2015. As citizens we are alarmed by mind-boggling wrongdoing perpetrated during this period and we are even more perplexed that the Law Enforcement and Anti-Corruption Agencies have over the years appear uninterested and unwilling to probe the many allegations of infractions allegedly committed in Lagos state.