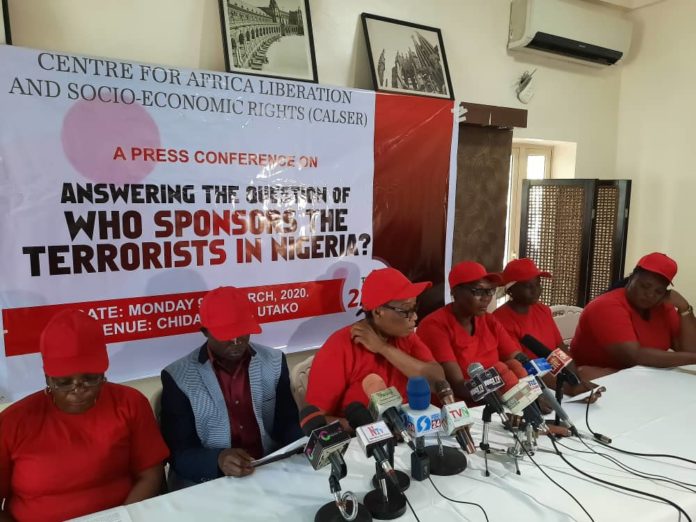 The Centre for Africa Liberation and Socio-Economic Liberation (CALSER) has welcomed the Federal Government’s decision to investigate and prosecute Boko Haram sponsors in the Northeast.

The centre said this has once again confirmed the FG’s “ unalloyed commitment to preserving the sanctity of lives and properties of all Nigerians”.

Speaking at a press conference on Monday in Abuja, convener, Princess Ajibola hailed the Nigerian military for its tremendous feat in the war against terrorism despite conspiracy by desperate politicians and their cohorts in foreign countries.

According to Princess Ajibola, this group has continually engaged in acts that undermine the efforts of the military, from supplying food, drugs, to arming Boko Haram terrorists.

CALSER, therefore, backed the FG to investigate and prosecute these Nigerians who have formed a deadly alliance with international non-governmental organisations as it will mark the final victory over the terrorist group.

The centre equally urged relevant security agencies to begin the process of profiling and identifying these individuals and organizations that have elected to enemies of our great country.

The leadership of the Centre for Africa Liberation and Socio-Economic Rights (CASLER) warmly welcomes you all to this press conference at the instance of the patriotic steps taken by the Muhammadu Buhari’s administration to investigate and prosecute the sponsors of Boko Haram terrorist group in Nigeria.

CASLER, in continuation of its core mandate, wishes to commend the efforts of the Federal Government of Nigeria in sustaining a decisive campaign against the Boko Haram terrorist group in Nigeria.

It is indeed a testament to the unalloyed commitment to preserving the sanctity of lives and properties of all Nigerians by ensuring that the Nigerian Military is well equipped and motivated to defeat all acts of terrorism in Nigeria.

This fact is evident in the numerous gains recorded in the theatre of operations in North-East Nigeria, and which was corroborated recently by the Governor of Borno State, Prof. Babagana Zulum where he stated that the Nigerian Military displayed unprecedented gallantry when they tackled the Boko Haram terrorist from ground to air in Damboa and seized 19 Gun Trucks belonging to the defeated Boko Haram terrorist group.

The leadership of CASLER is also appreciative of the various rescue operations carried out by the Nigerian Military that has seen to the rescue of thousands of women, children and elderly ones once held in captivity by the terrorist group in their various camps scattered around the fringes of the Lake Chad Basin region.

This is also on the heels of the ongoing rehabilitation and resettlement of displaced persons back to their communities and their loved ones by the Nigerian Military as a part of its strategic objective of ensuring that all displaced persons are reunited with their families and loved ones.

The leadership of CALSER wishes to state that with the current zeal and commitment displayed by the Nigerian Military, the end of the Boko Haram group is indeed around the corner despite the political patronage the group enjoys from some political elements that have been covertly providing logistical support to them in furtherance of their nefarious activities.

This despicable stance by those politicians that have benefited from the crisis to loot the commonwealth of the people is mainly responsible for the pocket of attacks carried out by the Boko Haram group in recent times.

It is also a statement of the fact that these individuals are hell-bent on destabilizing the country so that it can return to business as usual as it were in times past before the advent of the Muhammadu Buhari led administration.

We consequently wish to state that it is indeed despicable that these politicians are in cahoots with some foreign interest that are envious of the gains made by the Muhammdu Buhari administration in the war against terrorism since 2016 when the Nigerian Military gained ascendency over the Boko Haram group that saw to the retaking of the over 16 local government areas in North-East Nigeria hitherto under the control of the group.

The capture of the operational headquarters of the Boko Haram group, Camp Zero in Sambisa forest was indeed the game-changer in the war against terrorism and this heroic feat indeed unsettled these foreign agents of destruction and they have been doing all they could to undermine the efforts of the Nigerian Military in numerous ways, including ensuring the continuous flow of money to the insurgents through the activities of International Non- Governmental Organizations.

CASLER views this action as a crime against humanity as it is unfathomable as to why International Non-Governmental Organizations who are supposed to be involved in Humanitarian efforts have betrayed the essence of their humanitarian intentions in the first instance and have suddenly become agents of the terrorist groups.

They have continually engaged in acts that undermine the efforts of the Nigerian Military, such as supplying food, drugs, and arms and ammunition to the Boko Haram group in conjunction with those foreign interests that are plotting the destabilization of Nigeria.

The leadership of CASLER is indeed in support of the decision of the Muhammadu Buhari administration to investigate and prosecute the sponsors of the Boko Haram group in the light of the prevailing circumstances.

We are indeed convinced that this line of action will mark the final victory over the terrorist group as their sponsors have continued to use falsehood, mischief, and propaganda to manipulate the minds of Nigerians and diverting attention from their evil acts.

The leadership of CASLER welcomes this initiative and wishes to express its total support to the Muhammadu Buhari administration in this regard as it would usher in the needed peace in North-East Nigeria and an end to the inglorious era of the Boko Haram terrorist group.

The leadership of CASLER is with this using this medium to call on the relevant security agencies to begin the process of profiling and identifying these individuals and organizations that have elected to enemies of our great country.

We also call on the judiciary to embrace this worthy initiative by setting up special courts that will dispense justice and in record time. The judiciary must also not allow itself to be manipulated, as in the case in the past.

President Muhammadu Buhari must, as a matter of national interest, ensure that anyone found guilty gets maximum punishment as it would serve as a deterrent to others and an avenue for them to repent from their evil ways.

The leadership of CASLER wishes to assure President Muhammadu Buhari that indeed all well-meaning Nigerian welcomes this initiative and are in total support of it.

We thank you all for your time and wishes to state that the end of the Boko Haram group is indeed in sight. Nigeria shall defeat terrorism, and Nigeria shall over its security challenges to the astonishment of that are plotting to destabilize the country.

Our unalloyed support of the Muhammadu Buhari’s administration decision to investigate and prosecute sponsors of the Boko Haram Terrorist Group in Nigeria is unflinching.