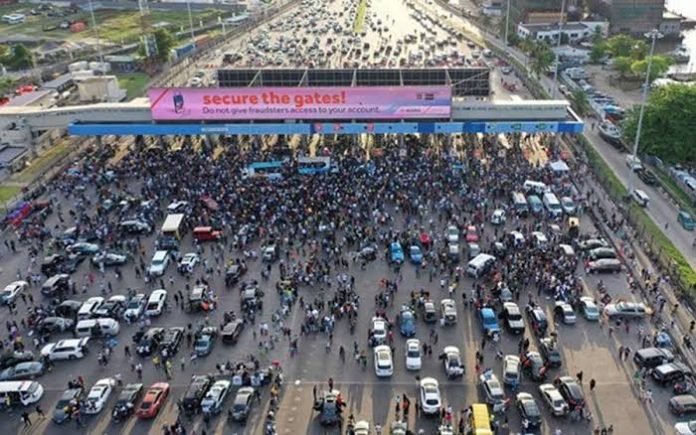 A human rights lawyer, Werigbelegha Zinaka has stated that the Nigerian Army has been vindicated of any wrong doing at the Lekki Tollgate incidence. He said this in an interaction with journalists on the sides at the ongoing hearing of the Lagos State Judicial Panel of Inquiry and Restitution in Lagos.

The human rights lawyer who serves as an attorney for the International Human Rights Association at the panel also stated that from the CCTV footage that was analyzed, it indeed vindicates the Nigerian Army of any wrongdoing.

“All concerned parties viewed the CCTV footage, and I wish to state that it was clear that the consensus is that the Nigerian Army did not commit massacre as wildly alleged in some certain quarters in the country.”

He further stated that with the various presentations at the panel, there had not been any evidence to substantiate the fact that any life was lost at the Lekki Tollgate.

“This panel has been very meticulous in its analysis, and I can tell you that serious business is going on here. I can also say from all the submissions and reviews; there has not been any evidence to back the claims the lives were lost at the Lekki Tollgate incidence and most especially from the CCTV footage that was reviewed.”

“So it remains an illusion that the Nigerian Army committed massacre at the Lekki Tollgate. This is understandable given the role of fake news in the whole scenario. And ironically, those that were spreading all sorts from their comfort zones have refused to come to the panel to substantiate their claims.”

He further faulted the recently released report by the Cable News Network (CNN) stating that it was done in bad faith and not a reflection of the issues on the ground.

“The CNN report was highly misleading and with an ulterior motive in my candid opinion. It was obvious that the target of the report was the Nigerian Army, and it was very poor in its execution. It was more of a judgmental pronouncement than a news report, and I am not aware that CNN is an arbiter of the law. This much they must be aware of and the need for some level circumspection in analysis of issues of this nature.”

“We must call a spade a spade and understand that what the CNN attempted to do in its report was to influence the outcome of the Judicial Panel of Inquiry and Restitution with regards to the involvement of the Nigerian Army. The backlash the report has received indeed says it all. And I believe that CNN must have learnt its lessons.”

It would be recalled that in the aftermath of the escalation of violence at the EndSARS protests, the Lagos State Government inaugurated a 7-member Judicial Panel of Enquiry and Restitution for Victims of SARS Related Abuses in the State.