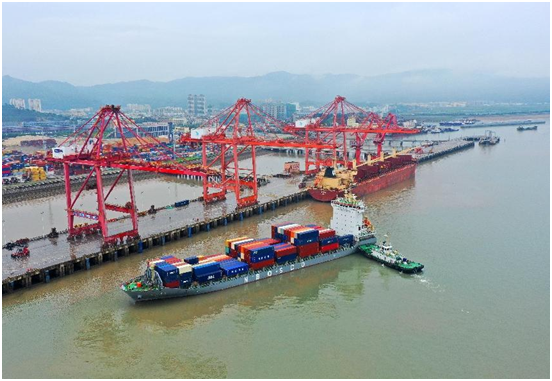 The Regional Comprehensive Economic Partnership (RCEP) agreement took effect for Indonesia on Jan. 2, which means the freetrade pact has taken effect for 14 of its 15 members so far.
It fully indicated the huge appeal and vitality of the RCEP will inject new impetus into regional economic integration.
As the world’s most promising free trade area covering the largest population and boasting the most diverse membership, the RCEP has released constant dividends through tariff reduction and expanding market access over the past year.
It has facilitated the free flow and efficient gathering of the factors of production, made closer the trade and investment cooperation among its members, and contributed to higher- and deeper-level regional economic integration.
The trade pact has injected strong positive energy into the prosperous development of the region and even the world at large, and brought tangible benefits to enterprises and people.
According to statistics, the exports of Korea and Singapore to other RCEP members grew by 18.7 percent and 19.1 percent in the first half of 2022, respectively. In the first nine months of 2022, the trade volume between Thailand and other RCEP members increased 10.1 percent year on year.
Auramon Supthaweethum, head of the Department of Trade Negotiations under Thailand’s Ministry of Commerce, said the most obvious benefit of the RCEP’s implementation is that the trade pact has boosted trade between its members and further facilitated regional economic integration.
Indonesian Trade Minister Zulkifli Hasan noted the RCEP is expected to increase technology transfer and boost the development of supply chain in the region by expanding exports of goods and services.
Despite the fluctuations in global investment, most RCEP members have seen rapid growth in the utilization of foreign direct investment. The Asian Development Bank recently lifted its forecasts for economic growth in Southeast Asia, which to some extent reflected the positive impacts from the RCEP on regional and national economic development.
As the largest RCEP economy, China champions true multilateralism and follows open regionalism. It has worked with relevant parties to advance the high-quality implementation of the RCEP, so as to make the world’s largest free trade area release more dividends.
From promoting the development of trade of goods and ensuring that preferential rules of origin play their roles, to implementing customs procedure and trade facilitation rules at a high standard and further opening up the service trade sector, China has continued working with relevant parties to advance trade facilitation and investment liberalization.
In the first 11 months of 2022, China’s total trade with other RCEP members reached 11.8 trillion yuan ($1.71 trillion), up 7.9 percent year on year and accounting for 30.7 percent of China’s total imports and exports.
According to a report released by the HSBC in November the last year, 93 percent of the surveyed enterprises said their trade with China might increase in the future, and over 40 percent of the respondents expected that their business in China would increase by at least 30 percent in 2023.
The Asia-Pacific has entered a key stage of post-pandemic recovery. Economies in the region are seeing disorders in the supply chain, tension in food and energy supply, as well as increased pressure from inflation.
Under such a background, RCEP members have worked hand in hand to promote the implementation of the comprehensive, modern, high-quality and mutually beneficial free trade pact. Together, they have sent a positive signal of safeguarding multilateralism, following open cooperation, promoting free trade and striving for common prosperity. It is not only significant to the RCEP members, but also will inject new impetus into the in-depth development of economic globalization.
Peter Drysdale, head of the East Asian Bureau of Economic Research at the Australian National University, pointed out that the RCEP has already demonstrated its potential of projecting Asian dividends to the globe in its first year of implementation.
Openness is a key driving force behind the progress of human civilizations and an intrinsic path toward global prosperity and development. China will keep staying committed to a win-win strategy of opening-up, open up more sectors of the economy in a more thorough fashion, and provide new opportunities for the rest of the world with its own development.
The country is willing to work with all relevant parties to implement the RCEP at a high standard, promote the building of an open world economy, and create bright prospects for the future of the world through openness.